Renewable energy poised to overtake nuclear in the UK 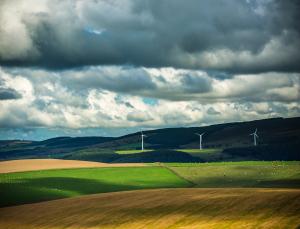 A wind of change is blowing through the UK’s power stations. Renewable sources of energy like wind turbines could soon generate more electricity than nuclear power stations.

The contribution of renewables towards keeping the lights on more than doubled from 6.8 per cent in 2010 to 14.9 per cent in 2013, according to the Office of National Statistics. Nuclear power, at 19 per cent, is in slow decline – no new power stations have been built since 1995, when it contributed more than 25 per cent of the UK’s electricity.

Onshore wind turbines delivered a third of the country’s renewable electricity in 2013, with offshore wind rising fast and accounting for 21 per cent. A plan approved last week for the world’s largest offshore wind farm – 400 turbines covering more than 1110 square kilometres of the shallow waters of the Dogger Bank in the North Sea – would add almost two-thirds to existing offshore generating capacity of 4,000 megawatts.

The UK has invested £14.5bn in wind turbines since 2010, supporting 35,400 jobs, says Ed Davey, secretary for energy and climate change. Renewables are also reducing our reliance on foreign imports of fuel, he adds.

“Wind has already outperformed nuclear on several days over the past 12 months,” says Gordon Edge of Renewable UK, which represents the wind and marine energy industry. “The gap is closing fast. Renewables are set to overtake nuclear on a permanent basis by the end of the next year.”

Other significant renewable UK electricity sources include bioenergy – where co-firing, buring plant biomass together with coal, leads the way – hydroelectricty and solar power which, despite the increasing visible presence of photovoltaic cells on the nation’s roofs, lags behind.

The Office of National Statistics, a government agency, says the UK is ‘on track’ to meet its European Union green energy targets, which cover transport and heating as well as electricity. Use of natural gas for heating buildings has been stable for 20 years as better energy efficiency measures have compensated for more homes. And transport – the biggest single user of energy for the past 25 years – is still overwhelmingly driven by oil.

Energy use is in long-term decline in the UK. Consumption in the past three years has fallen back tot he levels last seen in the mid-1980s. This is thanks to industrial slashing its power consumption by half since 1980, and to the adoption for energy efficiency technology.

Declining energy use and a greening of energy supply have combined to help bring down the nation’s carbon dioxide emissions by 22 per cent since their peak in 1990, despite a 66 per cent inflation-adjusted increase in GDP during that time.