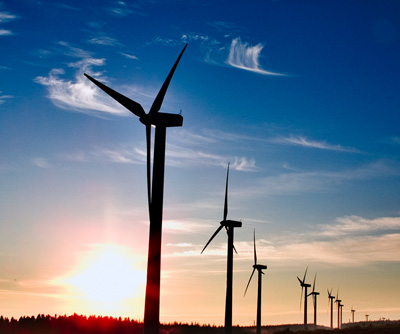 More than a dozen wind farms and five solar farms are among first projects to receive financial support under contracts for difference.

The contracts fro the new renewable energy projects amount to more than £315m in total, spread across five renewable technologies, and taken together should produce more than 2GW of new generation capacity, enough to power 1.4m homes.

But green campaigners and parts of the renewable energy industry were disappointed by the auction process used to award the contracts, arguing that some technologies and projects had lost out in the reforms.

The support for onshore wind comes even as the Conservatives have promised to cut or abandon subsidies for the technology, with David Cameron saying people have been ‘fed up’ with turbines on land. It is not clear how the projects could be affected if a Conservative government is re-elected in May.

Ed Davey, the Liberal Democrat energy secretary said, “These projects could create thousands of green jobs and give a massive boost to homegrown energy while reducing our reliance on volatile foreign markets.”

However, the solar power industry was quick to point out the sizable difference in the number of wind projects awarded contracts compared wind solar schemes. Solar farms tend to be brought forward by smaller companies, which lack the financial muscle to compete against big players, whereas many wind farms are championed by large international energy utilities.

Richard Dixon, of Friends of the Earth Scotland, said offshore wind has also received less support than it should have, given the potential of the technology. “These results are very disappointing [with only two offshore wind farms supported showing] how little interest the current government has in leaning up our energy supply. Today is another nail in the coffin of the coalition’s claim to being the greenest government ever.”

Under the coalition’s electricity mark refors, large renewable energy projects no longer receive direct subsidies funded by the electricity bill-payer. Instead, they compete in auction for ‘contracts for difference’, by which they undertake to generate a certain quantity of energy replacing what would otherwise have come from fossil fuels.

Davey said the auctioning mechanism has driven down the cost to billpayers of generating more low-carbon electricity. The DECC has estimated that the projects will cost £110m less in bill-payer support than they would have done without the auctions.

In response tot he first Contracts for Difference auctions for renewables, Greenpeace Chief Scientist Dr Doug Parr said, “Today’s announcements show renewables’ costs are plummeting, and will month a growing challenge to conventional sources of power in delivering energy security for the UK.

“Those who say should tackle climate change but are opposed to wind and solar farms need to explain how they plan to cut carbon emissions whilst keeping consumer bills as low as possible.

“We’ve known onshore wind is much cheaper than nuclear for a while, but now we learn that solar power is already cheaper than new gas generation in some cases. It makes you wonder what could have been achieved with less party political maneuvering and more stable Government support for the clean technologies already being embraced by the world’s largest economies.”